Nearly two-thirds of all domestic fires start because of something to do with cooking.
This is a guide to how to keep safe while cooking – and what to do if a fire does start in your kitchen. 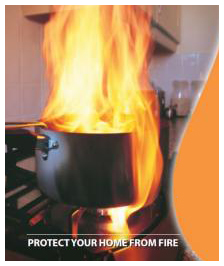 The cooker keep electrical leads from trailing over or going near the cooker.

Don’t hang tea-towels or cloths on or over the cooker and don’t put oven gloves down on the cooker after you’ve used them keep the oven, hob and grill clean as a build-up of fat and bits of food can start a fire.

Don’t leave pans on the hob when you’re not around – take them off the heat if you have to leave the kitchen (even if you think it will only be for a moment, while you answer the door or phone)

• Don’t put anything that is made of metal, or has a metallic finish or parts, in the microwave
• Don’t dry clothes in the microwave
• Electrical items in the kitchen
• keep electrical leads away from water
• Don’t put a plant pot or anything wet on top of an electrical appliance
• Check the toaster is clean and well away from curtains; empty the crumb tray regularly
• Don’t overload sockets – one plug per socket is the rule, especially if the appliance takes a lot of power (like a kettle)
• Don’t run extension cables across the floor, as they can become worn
• Electrical appliances – especially those that work at high speeds, such as the washing machine – should be serviced each year
• Don’t leave appliances such as washing machines or dishwashers on at night
• Check that your kettle is not leaking – this can be dangerous
• See the chapter below on electrical safety for more details on the safe use of electrical appliances at home.

Check regularly that the ventilation in your kitchen is working properly and is not blocked up, especially if you have a gas cooker Protection buy a smoke alarm fitted with a “hush button”, so if it goes off accidentally you can silence it instantly and aren’t tempted to remove the battery (except to change it for a new one) consider having a fire blanket in your kitchen, mounted on the wall where you can get to it easily and quickly

Most kitchen fires occur when people are distracted or leave things unattended, so remember:

If you’re called away from the cooker – by the phone or someone at the door, for example – take pans off the heat don’t let yourself be distracted while cooking.

• Don’t cook if you’re affected by alcohol or prescription drugs.
• Turn saucepans so that their handles don’t stick out (and aren’t over another ring)
• Don’t put oven gloves or tea-towels down onto the hot cooker after you’ve used them
• Clean your grill pan after using it
• Deep-fat frying presents more dangers in your kitchen.

If you do have a chip pan fire:

Dealing with a fire in your kitchen
If you do have a fire in the kitchen, don’t take any risks – get everyone out of your home and call 999.

• If a pan catches fire don’t move it – it is likely to be extremely hot
• Turn off the heat if it’s safe to do so – but never lean over a pan to reach the controls
• If you have a fire blanket, put it over the pan don’t use a fire extinguisher on a pan of oil – the force of the extinguisher can spread the fire. If you have put the fire out, leave the pan to cool completely

If you have an electrical fire in the kitchen: pull the plug out, or switch off the power at the fuse box – this may be enough to stop the fire immediately smother the fire with a fire blanket, or use a dry powder or carbon dioxide extinguisher remember: never use water on an electrical fire.